How a softener works and what is hardness

Hardness is often a problem in several industrial processes that use or produce hot water, because of the risk of precipitation and scale deposits.

The hardness of a water is due to the presence in it of dissolved calcium and magnesium salts. The water is discharged of these salts dissolving them in the subsoil as it filters through the different layers rich in minerals. The hardness is measured in French degrees (° F), 1 ° F indicates a content of calcium and magnesium salts equivalent to 10 g of calcium carbonate (CaCO3) in 1.0 m3 of water.

In Germany we speak of “total hardness”, to distinguish it from the carbon hardness (corresponding to alkalinity M), and it is expressed in dH (Grad deutsche Haerte, or German degrees of hardness), which correspond to 10 ppm CaO. Since the CaCO3: CaO ratio is 100: 56 it follows that 1 ° F corresponds to 0.56 ° dH, while 1 ° dH corresponds to 1.786 ° F.

There are also English degrees of hardness, which however are not normally used. The French call the hardness TH (Titre Hydrotimetrique) and speak of total TH to indicate the sum of calcium and magnesium.

Elimination of hardness by ion exchange

The exchange resins contained in the softener have the property of fixing calcium ions, releasing sodium ions in exchange.

During the production of softened water the resin, charged with Na+ ions, captures the Ca++ ions from the water and transfers as many Na+ ions to the water:

When all the sodium has been transferred, the effect of the resins ends, which must then be regenerated, removing the fixed calcium and recharging them with sodium.

This is achieved by washing with a solution of sodium chloride in water (brine). During brine washing, the exhausted resin, loaded with Ca++ ions, captures the Na+ ions from the brine and gives the brine as many Ca++ ions:

To ensure a continuous cycle of softened water, suitable duplex water softeners with a double exchange column are created, which allow the alternate regeneration of the resins to one column while the other works, exchanging with the delivery of a certain amount of water, everything is managed by an electronic head.

Omz realizes plants with water softeners suitable for all needs, to guarantee our customers very high quality levels. To talk about this and more, come and visit us at our booth B121 in Hall 25 at the Autopromotec of Bologna from May 22nd to 26th.

OMZ is a Company engaged – for decades – in the field of the industrial washing plants, producing a range of devices and plants suitable to meet the most demanding requests. 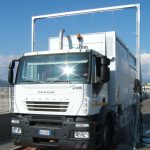 OMZ has always included in its production mobile plants for sanitizing vehicles used for the transport of goods and people, to be used, in case particular events may require a sanitizing action, to stop the spread of epidemics such as avian flu, foot and mouth disease and others that require special sanitizing care of vehicles

Find out more or adjust your settings.

This website uses cookies so that we can provide you with the best user experience possible. Cookie information is stored in your browser and performs functions such as recognising you when you return to our website and helping our team to understand which sections of the website you find most interesting and useful.

Strictly Necessary Cookie should be enabled at all times so that we can save your preferences for cookie settings.

If you disable this cookie, we will not be able to save your preferences. This means that every time you visit this website you will need to enable or disable cookies again.

This website uses Google Analytics to collect anonymous information such as the number of visitors to the site, and the most popular pages.

Please enable Strictly Necessary Cookies first so that we can save your preferences!

Please enable Strictly Necessary Cookies first so that we can save your preferences!